Pollo Del Mar and her drag mother, Landa Lakes made a special appearance at Badlands in Sacramento Thursday night. What should have been an hour and a half drive from San Francisco to Sacramento took over 4 hours due to holiday and commute traffic. At some points, they were traveling at speeds as low as 5 MPH. Spending almost 5 hours in a car in the heat of July with temperatures ranging from 65° F In San Francisco to 92° F in Sacramento.

They made it safely, in time to enjoy dinner and get ready for the show.

And what a show they had, Pollo Del Mar opened the show with “We Belong Together” by Mariah Carey. While Landa followed with Lana Del Rey’s “Young And Beautiful.” While mother and daughter have unique stage presence, their styles differ in that Pollo loves to be in the crowd with her fans as Landa is all eyes on her and rightfully so.  She engages in eye contact and gets you pulled in.  While Pollo has a very personable style of audience engagement. 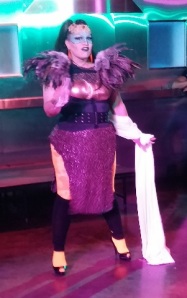 In between sets, Pollo Del Mar hosted several contests for VIP tickets to the Bianca Del Rio show on July 20 and free passes to the club on any other “no special” nights. We saw big girls with their titties hanging out do splits and leave strange marks which have damaged Pollo forever. Super drunk gay guys with their shirts buttoned incorrectly and even a little hottie who took off her shirt to win the crowd over.

Pollo Del Mar, ever the gracious host, mingled with the crowd in between sets and introduced us to the

regulars and crew at the club. What we found most endearing was the time she spent with us. We can’t express enough how much her friendship has meant to us, but to spend most of her free time with us, meant more than words can express.

If queens like Landa Lakes and Pollo Del Mar can spend almost 5 hours to get to a club, make sure you get there too. We promise you, it’s well worth whatever commute or cover charge you pay.  They are true showgirls and have the class and performance skills of true royalty.