The drag world has been blessed by the gawds with the talents of Lacey Noel. She’s what’s called a Bio Queen normally as she dresses up in costumes with wigs and

exaggerated makeup but when she dresses up as the various queens from RuPaul’s Drag Race she calls it “Faux because I’m not really those people.” Which is funny because the queens aren’t actually those people either! Lacey took time out of her busy schedule to speak with us about her project and answer some questions. 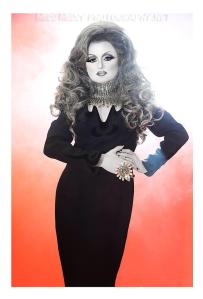 Lacey may only be 17 years old but the life she’s lived already has been quite the journey. She was born with a rare blood disorder that had her in the hospital as an infant dealing with a bone marrow transplant and chemo-therapy, which has lowered her immune system and increased her chances of getting sick or hurting herself. She was lucky enough to get a bone marrow match from a total stranger. Against all odds, she’s defied medicine and thrived into the glorious person she’s become.

She is very close to her mother Missy, who had Lacey in her teen years and grew up quickly having to deal with a child with so many health issues. Having this relationship has probably been the biggest reason Lacey is so mature and grateful. Lacey has a great appreciation of life after all she’s been through and she hasn’t wasted any time getting to what she considers a career.

Lacey credits the remake of Hairspray and To Wong Fu for piquing her interest in drag. Admitting she watched Hairspray every day which was what inspired the look she has now which started at 10 years old. Her style is very 60’s inspired every day and she gets

comments from people about how she dresses. She also loves Austin Powers (yeah baby) which attests to more 60’s love from Lacey.

Lacey shared with us that she’d like to get to the point where she is able to showcase her work in a gallery but she needs to do another 10 queens or so to get that done. We have no doubt she’ll reach her goal since she’s already on the who’s who of the West Hollywood drag scene. Her recent acceptance into the World of Wonder family which at press has not been officially aired, will explode her popularity and continue to grow.

Check out Lacey’s YouTube channel to enjoy the fun she’s had with queens and be sure to follow her on Tumblr, Twitter and Facebook to see what else she’s working on. This young lady will be rocking the looks of your favorite Drag Race queens.