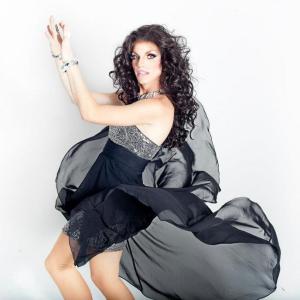 We always ask our readers to recommend drag queens we should reach out to and cover. Well we sure got more than we bargained for when we heard about JizzaBella. What started off as a few missed connections due to schedule conflicts turned out to be a three hour tour… But we did come back and weren’t stranded on an island like that other well known three hour tour. And we’ve tried to sum up the wonderful conversation in our latest interview article.

JizzaBella is a New York queen with a love for Cher (as is required by the drag gods) and a flare for the sexual innuendo, c’mon her name alone tells you that. But this sexy siren is more than just a hot sex kitten, she’s also an open book. You can literally ask her anything and she’ll answer honestly… go ahead, try, but after you read this, because we may have already asked it for you.

Her first year of college she had a teacher that told her to go out and just do something outside the box. She didn’t

know anything about drag and hadn’t experienced anything about drag, but she participated in a school drag show in 2009 and froze up on stage. Being a perfectionist, she felt the need to get back into it and credits the beginning of her drag career as the motivator for constant improvement.

We asked, “why drag?” and the explanation was simple, “everybody likes to be noticed and everybody likes to feel somewhat of importance….instead of me used to being in the shadows now I’m in the spotlight kinda thing.” She did admit, when out of drag she’s a little more shy than when she’s in full drag, but her drag side has definitely lent a hand to her boy side in breaking through the shyness and being a little more outgoing when out in the club.

JizzaBella said she didn’t like to be pigeon holed by a “drag family” because she feels like there’s the potential to be “stumped” by the success of a parent. But she does credit Samantha Vega as being more of her “Drag Father” instead of the typical drag mother. But she doesn’t have a “family” per say, but her biggest influences are Lady Bunny, Sherry Vine and of course her drag mother/father Samantha Vega. She admires Lady Bunny and the fact that she can get more gigs after being in drag for such a long time. She said “Lady Bunny’s always been compared next to RuPaul and I feel like sometimes she’s hidden from the spotlight just because she was always known as RuPaul’s roommate or something of that sort. So any time you always think of Lady Bunny you always associate her with RuPaul even though she’s got her own fame and everything of that sort.”

We asked Jizza how she would describe her drag, “more on the polished side definitely have a little messiness which adds a little fun to it.” “I’m honest and sometimes awkward… I’ll laugh at jokes before I finish them.” Anyone can see her drag is so much fun, but also very sexy and fishy. The description she gave is right on point.

She’s tried out for RuPaul’s Drag Race twice and intends on auditioning again this year for Season 8. She did take a break from auditioning for Season 7 due to the emotional strain it put on her to find out she wasn’t cast. She had become, in her words, “engrossed” in drag a little more than she felt comfortable with. But she did say she felt like RuPaul’s Drag Race has “made drag become more of a mainstream thing, where it allows us to have higher hopes for what we wanna go for. But it’s also added more cattiness to the drag community just because people have to undercut or they’re gonna do anything they have to do to get on that show. Which I think is sad because we’re all supposed to be like family… I really believe that drag queens are one of the biggest symbols in the gay community. It’s a responsibility because anything we do is going to be shown to someone who’s looking up to us. So when you’re showing cattiness and being cruel and reading and all that stuff, there’s some 16 year old out there that’s watching us on the internet and they’re like ‘wow'” and then that’s where we get little bitchy gay boys.”

The family life of JizzaBella is really supportive and her two sisters are her biggest fans. She also talked about trying to explain drag to 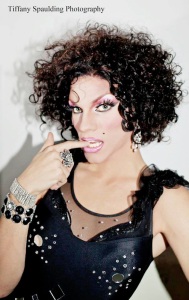 her grandmother, but because of the sexual content of drag, she usually refers to her drag gigs as “makeup gig” or “performance.” We found it endearing and heart felt when she talked about her family. She lost her mother when she was 13 and felt a lot of stress as a result. But she’s known for her Cher opening numbers, she admitted that Cher brought her closer to her mother.

JizzaBella used to manage some of Drag Race royalty like Bebe Zahara Benet and Venus D-Lite and finds the booking habits of the queens whose shelf life is so short should change because they’re raping the wallets of the clubs. She feels like a more accommodating queen would take into consideration the size of the venue and negotiate terms accordingly. This would not only help provide consistent work, but allows for a return visit and potentially more income. Her business skills are smart and she’s not afraid to share what she knows with the community.

While JizzaBella is prepping for her birthday “tour” this week, she’s working on securing a place for her show. Be sure to get in on all the action and craziness going on for her celebration. Click HERE to get the list of locations you can find JizzaBella as she spreads her love. 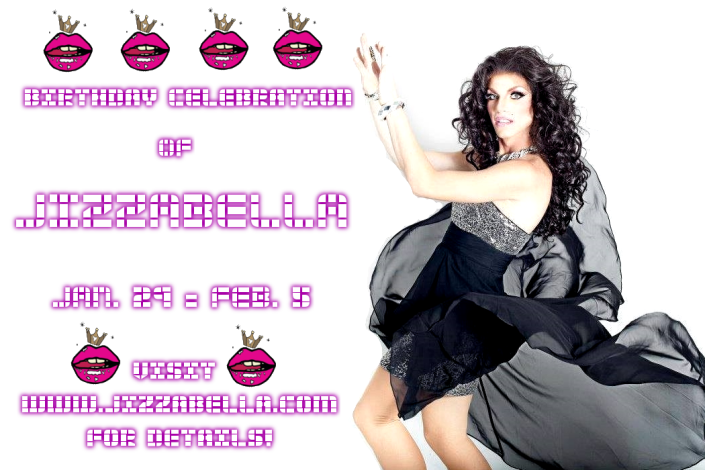