Drag queens have been around for ages but the growing popularity of RuPaul’s Drag Race has changed the game for drag queens around the world. From all new pageants, local drag competitions and even Drag Queens of London, it’s a great time for drag, but for one drag queen, the shows are not the limit. British Columbia’s Foxy De-Rossi (aka Travis Shaw) decided her hometown of Prince George should have diverse representation. Foxy took some time to speak with us this week and gave us some insight as to how this drag politician came to life.

Foxy De-Rossi was born Travis Shaw in 1984 to a native family in Prince George, British Columbia, Canada. She was adopted by her parents shortly thereafter and lived a life of struggle and glamour. Growing up with her family in music she new celebrities as regular people in her life. But her struggle was as prevalent as the celebrities in her life. She grew up in a mostly conservative Caucasian area and as a native gay boy it was difficult to say the least. She recalled times where people would tape bullets to her locker and write notes stating, “the next one is for you.” Foxy was an advocate for those who were seen as “different” from a very young age. 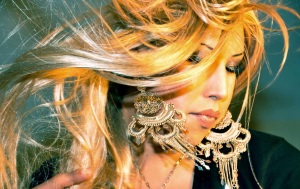 She started drag at 13 during a talent show and it just stayed with her. She told us she got her drag name from both RuPaul and Jenna Jameson. When we asked her to elaborate, she explained she’d called RuPaul back when she was still on the radio and RuPaul said her original name was too long and changed her name to “Foxy’ but said she had to get a last name like any great queen. Fast forward to a night out with friends at local strip club when she was asked to work while insisting she was off that night. After giving her an offer she couldn’t resist, she agreed to “work” and headed backstage to find a girl laid out on the floor and another lady primping in the mirror. This lady (who would later be identified as Jenna Jameson) figured out Foxy was “a boy” and agreed to perform with her on stage requiring Foxy to only get down to panties and a bra. When the DJ introduced them as a team, Foxy heard her name as Foxy De-Rossi. Jenna spoke with Foxy post-show and apologized but said, just Foxy wasn’t enough, obviously it stuck.

While have lunch with friends, one suggested she run for City Council. Foxy’s excuse seemed perfect, she said she’d run if they’d allow her to run as both Travis and Foxy. She thought that would never happen, well to her surprise she received a call later that day that would change her life forever. She found out she could use both names on the ballot and had to run because she keeps her word. She was just shy 1,000 votes from getting a spot on the City Council.

Last year Foxy found out she had a brain tumor and went through a lengthy recovery. We are happy to announce she is back in action although limitations to her performance have been made. The long road to recovery has led her to the search deeper into herself. She’s learned a lot about being herself, which meant she had to step out of her comfort zone, in drag and into her male shoes. She admitted she felt more fearless in drag, where she could face the world with a “mask” on. But the brain tumor pulled Foxy back and made Travis have to come out of his shell.

Going through what has, she decided she’d give the City Council seat another run. She said she’s now come into her own and understands more about politics than when she ran last. She now stands for those who are “different” including gays, elderly, natives and anyone else who doesn’t feel like they’re part of the “majority.” One of the major things we’ve seen that sets her apart from the others is her commitment to going green. She refuses to uses signs, the signs we see years after every election, in the gutters, polluting the streets. She’s committed to creating programs assisting the natives from their lives at the reservations into city living. Her platform is to stand up for the working class, ensuring that the people who make the world go around are heard.

Keep an eye on this fabulous queen, she could be the next Canadian Prime Minister! She’s got our vote and if you’re in Prince George, make sure she gets yours too. Travis Shaw / Foxy De-Rossi for Prince George, BC, CA City Council!