When you’re at any event in San Francisco, you’re sure to run into this gorgeous, amazon woman who’s eye-catching 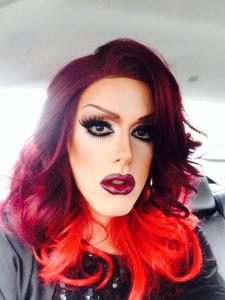 looks are relentless. While Carnie Asada is a relative newcomer to the drag scene, she’s taken on that sharp learning curve and brought beautiful art to the San Francisco Bay Area and beyond. We asked Carnie to speak with us and she was kind enough to squeeze us in.

Born and raised in Maine, Carnie was an art lover from the start and credits this love for art as her inspiration to do drag. Carnie received her Bachelor’s Degree in Visual Arts from Bowdoin College. She’d visited San Francisco while in college and when she got the chance to do so, she jumped at the opportunity to work and live in one of the world’s most well known artistic and gay parts of the world. Her family was not surprised by her desire to get into the “arts” as she says, her family knew she wasn’t going to be the plain “9-5er” and is very supportive of her drag and appreciate all the art that goes into it.

When she got here, she went right to work as the Assistant Director of Admissions at SF Art Institute, she was surrounded by art. Constantly inspired by the beauty and originality she saw day in and day out. She gradually made he way to the traveling canvas 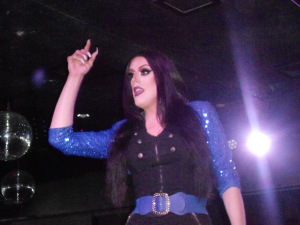 that was her face. She told us she toyed with makeup long before she got in the clothes and wig. But once she figured out what her face was doing, the next step of her art would be the hair and shoes. She laughed and quoted her drag mother Pat N’ Leather, “if your hair is fierce and your shoes are on point, no one’s gonna pay attention to what you’re wearing.”

While she does laugh and joke that she’s taken this advice, Carnie’s outfits are in no way lacking. In fact, she recently received a “Toot” from Raven and Delta Work during The Instagram Art of Mathu Andersen episode of Fashion Photo RuView. We asked Carnie about the submission and she admitted she’d done it after a long day and immediately fell asleep (passed out). Later that week, she remembered having submitted the photo because people were congratulating her on getting a much deserved “Toot” on her paint, outfit and overall shot. The awesome photo submitted was shot by Jose A Guzman Colon, the notorious photographer located in San Francisco who’s amazing work includes, among others, a number of the Racers of RuPaul’s show. 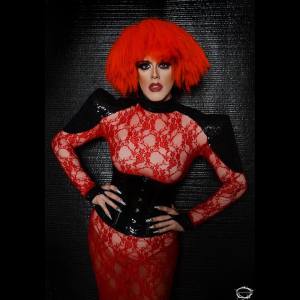 The intense look of Carnie would make you think she’s one of those “pretty girls” that you can’t approach, she’s a little intimidatingly beautiful. But do not let her beauty fool you, she’s hilarious! Her comedic timing and hilarious play on the every day occurrence is what helped get her shot at hosting her very own night called “My So Called Night” at Beaux on Thursdays in the San Francisco Castro District. Carnie Asada (the Smith was added because of the ridiculous #RealName policy issues brought on earlier this year) is a play off the very famous Mexican Food, which she says is her birth name. While she may be Asada, her friends/fans/followers are another meat, Carnitas. The conversation about the meatiness of her drag name and following made us hungry so we had to discontinue the conversation and have dinner.

We asked Carnie what she thought made her stand out so much. She said she tries to make each performance an experience, where the audience feels like they’re a part of the music. She infuses her look, the song and her physical performance to get the audience what she feels is the entire experience. She also said she tries very hard not to listen to the people who are just being shady with their criticism and keeps her mind open when constructive criticism is 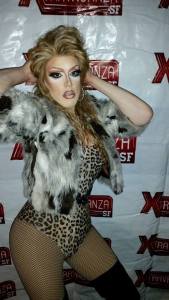 We asked Carnie the advice she’d give to someone who was just starting out in drag. She stuck with everyone who says, “be yourself,” but added, “if you haven’t figured out who that is yet, work on one thing at a time. Get good at your makeup, or your wigs, or your walk. Whatever it may be, then move on to the next part. Before you know it, you’ll have it all together.”

On a more serious note, Carnie had some medical issues in November 2013 and was hospitalized at St. Francis Hospital in San Francisco for anemia and a gastric ulcer resulting in severe blood loss. Thankfully she was able to get the blood transfusions and treatment needed to make a full recovery. However, even with insurance, the medical expenses piled up. As a result, Carnie has created a GoFundMe campaign to help raise money to pay the over three thousand dollar bill she has. Do what you can to spread the word and donate if possible to this lovely queen.

Follow the beautiful Carnie Asada on Facebook, Twitter and Instagram for all the latest with Carnie Asada. If you’re in the San Francisco Bay Area, check out her 90’s themed night on Thursdays at Beaux called “My So Called Night” where you can get 90 cent drinks! Talk about turning back time!