San Francisco’s Peach Christ is known for creating some of the most comical movie parodies in the city and even the world. Despite sound equipment issues, 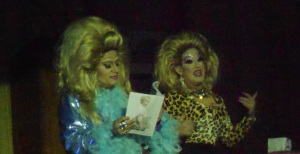 Peaches & Heklina’s High School Reunion would not fall short. Peaches cast friends from the beginning of her San Francisco drag scene and with that type of support she was destined for success. This performance will stick in Peaches Christ Productions history as one of the most successful performances despite all odds.

Anyone who has been the The Castro Theater for a Peaches Christ Production knows there were sound issues prior to this event. So the natural fix would be to implement new equipment to improve the audience experience. Unfortunately, the new equipment proved to be more work than it was worth. Even though Peaches was obviously angered with the issues interfering with the performance, she remained classy and professional and did not slander the equipment company, as tempted as she may have been.

But the show was much grander than the sound issues and ultimately beat the difficulties down with outstanding performances by the ENTIRE cast and the hilarious script. Peaches explained this event was at least a year in the making and her natural choice of casting herself opposite the legendary Heklina was all part of the reunion plan. The cast had so much history together, she mentioned it was truly a reunion show. Heklina And 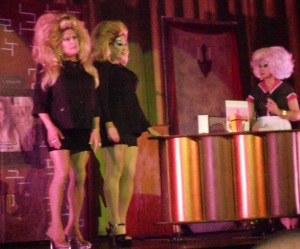 Peaches were supported by an outstanding cast, including drag theater celebrities like, D’arcy Drollnger, Lady Bear, Ginorma Desmond and Sue Casa. Sprinkle in Peaches’ mother, Mrs. Christ as the waitress, Martiny as the Fashion Editor for Vogue Magazine and Jen Taher as “Heather Troll Girl” (Janeane Garofalo’s character) made the reproduction absolutely hilarious!

The choreography, costume design, set and props added to the feel and really brought us back to the 90’s not to mention Peaches’ accent was a perfect portrayal of Romy’s (Mira Sorvino) unusual accent from the original movie. From her first queue, we heard that accent and she had us laughing non-stop with every line. Heklina’s aloof attitude, closely mirroring that of Michelle (Lisa Kudrow) brought us into the movie with ease. Following the plot closely and adding the 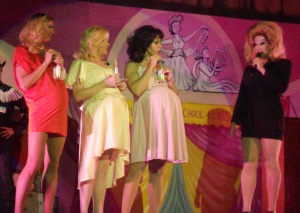 a touch of drag fun, the script drove drag loyalists to tears with laughter. Screams from the crowd for support during specific sexual references showed Peaches was once again in touch with the audience and their funny bone. Including the most memorable scenes from the movie, including the legendary trio dance number, executed perfectly by Peaches, Heklina and Manuel Caneri as Sandy.

The improvisation during some of the difficulties with the sound equipment was spot on and the cast couldn’t have been more perfect for this type of event. Peaches cast, made up of friends she’s known for decades, were right by her side showing support for this vision and enduring through the most frustrating times on stage. Instead of making post-its, they thought it might be a good idea to make microphones that actually worked. This line alone brought the audience to a roar! Proving that the San Francisco crowd was supportive and there for the once in a lifetime experience as all Peaches Christ events are. Another memorable improvisation was Peaches speaking to the audience about the microphones and Heklina asking “Romy” who she was talking to, immediately followed by Peaches asking Heklina who Romy was as they’d been using their drag names, Peaches and Heklina instead of Romy and

Michelle for the entire play up to that point.

Adding to the fun were intermittent dance and lip sync performances by Princess Kennedy, Jordan L’Moore and Martiny, the Chorus Classmates and even a closing number by the talented D’arcy Drollinger who admitted to us after the show, she’s not used to dancing with a pregnant belly and it added a little extra level of effort. No matter, D’arcy pulled it off in grand “Sextitude” fashion.

It was a laugh fest, the music was upbeat, the audience was excited and no sound issues could take away the wonderful experience everyone

was having on this wonderful Saturday night. Top the show off with the Susan Bradley, the title designer and the screenwriter of the movie, Robin Schiff showing up, getting on stage and praising Peaches and Heklina for a great adaptation of their original work. This crew has to be proud of the great accomplishment. We urge you to attend all Peaches Christ Productions, they usually only happen once and if you miss it, you’ve missed part of drag theater history.