The Miss Continental Plus pageant is held annually in Chicago, Illinois during Easter weekend and is one of the most coveted titles in the art of female 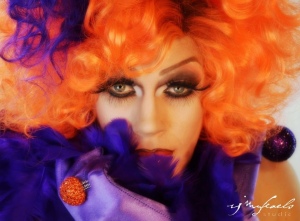 impersonation for “larger sized” entertainers. By larger sized we don’t mean “heavy weight” because Natasha Douglas is 6 foot 4 inches tall and qualifies as a “Plus queen.” Natasha took some time out of her extremely busy schedule to speak with us and we’re so glad she did.

Having just returned to drag after more than a decade long break from it about three years ago, Natasha Douglas has since auditioned for RuPaul’s Drag Race every year. Sadly she has not made it on the show yet, but she has her eyes on another prize. Natasha would like to be Miss Continental Plus

Being formerly known as a drug addict alcoholic she wanted to revamp herself and “create a new persona.” 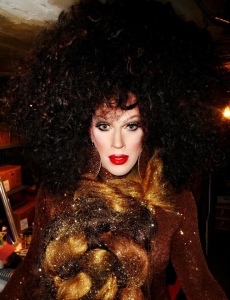 Natasha considers herself a female illusionist as opposed to someone who’s campy or anything else. But she did say the Chicago scene is very “fishy” and she understands that she may be “passable” on stage, but has come to terms with the fact that she’s a huge man with big hands and a deep voice.

How this queen has time to prepare for the pageant, we don’t know. She has her own show that she inherited from her friend Windy City called “The Dragtastic Revue” at The Pub in northern Indiana. She works in a salon and owns her own business called “Queen of The Style” where she takes wigs and styles them. On top of all that she does shows in Chicago as well. But staying busy bodes well for this recovering queen.

Now that she’s sober and more focused, Natasha admits to being a “precisionist” because she doesn’t believe in perfection. She has always been very attracted to detail and precision with “a little bit of a loose tongue.” But she said

“with pageants I like that it forces you to grow because you’re being judged on every detail and that carries through your career whether you are competing or you are performing on stage on your regular gig. I have been recognized more and more for that kind of discipline. I don’t believe in going out there looking sloppy.”

She’s excited to compete in the pageant and the preliminary is Monday, November 17th at The Baton Show Lounge in Chicago. Be sure to show Miss Natasha your support and follow her on Facebook, Twitter and Instagram for the latest updates and check out her YouTube channel to embark on the journey to the crown with her. We thank Natasha for speaking with us and look forward to the great things sure to come for this wonderful queen!