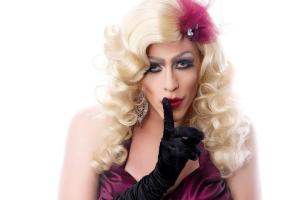 Anyone in the United States who wants to become a star tends to go to New York or Los Angeles. Cake Moss, born Sam Spillman, April 5, 1990 in Ohio, knew she had something special about her and did the same when she was old enough to do so. She grew up with her father disapproving her desire to dance and eventually her coming out and additionally being in drag. However, her mother demands she do her make up for her.

Her drag family consists of a drag mother who lives in Las Vegas who’s never really painted her face, but they did it side by side. But she doesn’t think she’ll ever have kids and she wants to have a child who is much more

fierce than her and she just hasn’t seen it at this time. So her drag family is a very small one, although she does have some drag sisters, including her best friend Allusia and Melissa Brown. In addition, she’s one of the hosts of Hard Werk at Micky’s in West Hollywood with RuPaul’s Drag Race Season 6 cast member, Laganja Estranja.

Cake gogo dances in drag like RuPaul used to do back in the day and when you see her perform you’re guaranteed to see some death drops, choreography and outright sick moves. She started dancing when she was eleven, but her dad did not want to do that, so she started back up when she was 17 and she’s not backed down since then. She leaves it all out on the stage and even when she’s just hanging out, the music inside her keeps her moving.

In addition she does something we’ve not really seen much. She’s a rapper with two songs, “Ratchet” and “Go In.” She’s been signed with Pink Money a record label with artists like Laganja Estranja, Willam
Belli, Rhea Litre and Ts Madison. The label is rumored to be attempting to sign Adore Delano and Courtney Act, two of the finalists of RuPaul’s Drag Race Season 6 and well know singers from the American and Australian Idol franchises.

Like most queens we’ve talked with, she says she’s more outgoing when she’s dressed as Cake, she can get away with

anything. She plans on taking the world by storm and being the supermodel of the universe.  With all she can do during her performances, we have no doubt she’s got what it takes to do so.

She’s a SAG-AFTRA card holder, which makes her a bonafide actor, who’s appeared in a number of commercials, television shows like Glee and movies like “Stretch.” While she didn’t give us the entire list of things she’s done and says her IMDb page doesn’t show nearly all she’s been involved in. She’s currently working on a talk show called 1 Gay 5 Queens, which has a talk show like format which she’s just begun taping this week. 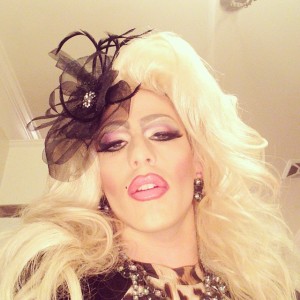 the right to judge. She says the amount of people who come up to drag queens and tell them what they’re doing wrong is annoying. While she understands there are people who are always going to say stuff, it’s just annoying to hear something all the time.

Her language is infectious, her “Yasss” is very unique and you may see her and her friends say the word “skas” which cannot be explained in any other way than, “when you’re sad, it’s like ‘skas’ and when you’re happy you can say, ‘skas!'”

She’s also a model, people ask her to do photo shoots in their clothes, but her male counter part, Sam gets booked for the fashion modeling. With all the things Sam and Cake have going on, it’s only a matter of time before you see Cake take over the world. She’s young and driven and we are really excited to see what’s next. Follow her on Facebook, Dragbook, Twitter and Instagram to keep tabs on what this fun queen is up to.