Several days ago, we found out about San Francisco drag legend, Cookie Dough and what was thought to be a stomach flu from ingesting water that has since turned into Adeema, a coma and now a stoppage of her heart has placed her on life support. While we are getting the information from our dear friend Pollo Del Mar, who has updated friends and fans of Cookie Dough via Facebook. She reached out to us in an attempt to gain more exposure to the story and efforts to raise money to get Cookie Dough the means to medi-vac her home from Puerto Vallarta, Mexico back home to San Francisco, California.

The most recent update is as follows:

The last two days have been insane & so incredibly draining for everyone who is hanging on a thread, waiting for new advancements with Cookie. It is a near-literal emotional roller coaster, filled with ups, downs, highs, extreme lows & unexpected turns by the second. However, today there is a legitimate light at the end of the tunnel for Cookie, Michael, the crew here & everyone back home.

The good news is this: We are now actively making plans to get Cookie on a Medi-Vac flight home, ideally tonight. This victory has not been easy, nor will it be cheap, but it is what Michael wants, what Cookie deserves & what MUST be done should there be any hope for an outcome with even a shred of silver lining. As a result, we implore you ALL to make additional donations to the GoFundMe published below.

Yesterday, after having completely lost faith in the local medical facility’s desire & ability to care for Cookie, I took matters in my own hands. After giving her doctor more than a SLIGHT piece of my mind privately — which any who knows me understands came with a tongue-lashing to make ANYONE cringe — I less-than-casually dropped the word “lawsuit.” He was noticeably terrified, as he should be. To drive the point home, within an hour I was on the phone with the local US Consulate (thanks for the hook-up, Peaches Christ).

Many were concerned the “L” word would compromise Cookie’s care, but it was the move necessary to get action. Two hours later, for the first time since this nightmare started, Michael & I were getting some answers — and the ball was rolling!

Sitting in the Hospital Director’s office, we were FINALLY presented our options & alternative care opportunities for Cookie. Until that point, nobody EVER, not even once, spoke to us about ANY possibilities other than letting her pass, which we were clearly loathe to do.

While I will not go into COMPLETE details about the outrageousness of this situation here, Michael & those in our tight inner circle of advocates, friends & helpers have been operating for DAYS under the impression Cookie is brain dead (which is why rumors spread so quickly she had died — & why I had to squash those here, on my page).

It has been incredibly difficult to keep this information quiet, but obviously Michael’s privacy is paramount, since the decision about how best to move forward is his — & his alone — to make. From the beginning, he has consistently pushed to get Cookie better care at home (which we are all in 150% agreement with) rather than “pull the plug.”

At our insistence, PV doctors finally performed the BARE MINIMUM tests required to determine brain functions. Lo & behold, the EEG has reported a low level of brain activity. While it in no way indicates what a long term prognosis is for Cookie’s health, it DEFINITIVELY proves “brain death” was an inappropriate diagnosis. Most importantly in the immediate situation, it makes her medically eligible to be flown to better facilities with more competent doctors. (Thank fucking GOD!)

Today, Michael, the cast & our now verrrry dear friend Kirk Saraceno had a conference call with Kaiser. Leaving most of the negotiation to Kirk. An ICU nurse by profession, he is able to speak the medical language spoken by the insurance company & doctors. He is also a pitbull who refused to accept any less than the respect & coverage Cookie & Michael deserve. Bravo, Kirk! You’re my new (s)hero!!

As a result, we now await confirmation from Kaiser about when & how Cookie will be transported home. It could happen as early as later tonight, morning at latest. Michael will either accompany her on the helicopter or fly home separately ASAP. We already have a bed reserved for Cookie at home, where her own doctors can attend to her. Friends in SF are literally lining up to make certain Michael is taken care of as well.

It is important to stress that Cookie’s health is medically categorized as “catastrophic.” There is tremendous concern as to whether this move can change the outcome of her situation, but one thing is certain:

We ALL believe the absolute BEST place for Cookie is San Francisco, the city she loves so much, surrounded by her hundreds if not thousands of adoring friends, family & fans. There she can not only receive the care & attention she deserves but feed off of the absolutely overwhelming flood of love, prayers, positivity & community support I am certain she had no idea before this most grave of times existed for her.

Please DO visit the GoFundMe link below if you would like to help in some way. This is money far better spent than sending flowers (as many have expressed a desire to do). This account was established with our permission by Forrest Parnell, a dear friend of Cookie’s, and is 100% legitimate, being supervised in part by many others involved (myself included) and will be used in it’s entirety to pay Cookie’s medical expenses here (required for her release to the US) & any other costs related to Cookie’s care up until now or going forward.

While I will post a more personal update about the cast & crew later, please know how significant your well-wishes, checks in, texts, calls, FB messages & prayers are to us. I know for fact we could NOT have reached this point without you.

Heklina, Peaches Christ and hundreds, if not thousands, of friends and fans have updated their Facebook Statuses with an outpouring of love and well wishes for Cookie Dough and her husband Michael Chu (DJ MC2). Right now, we’re all asking for as much help as possible. Please visit the GoFundMe campaign for Cookie Dough and share this and any other stories you see that have the link included in them to get as much funding as possible. As you can imagine Medi-Vac costs a lot of money and the care to keep her going and potentially bring her out of the state she’s in.

A huge thank you to Pollo Del Mar for keeping us up to date and reaching out to us for help with this great cause and may the joy and love of all the girls’ fans be with them all during this difficult time. 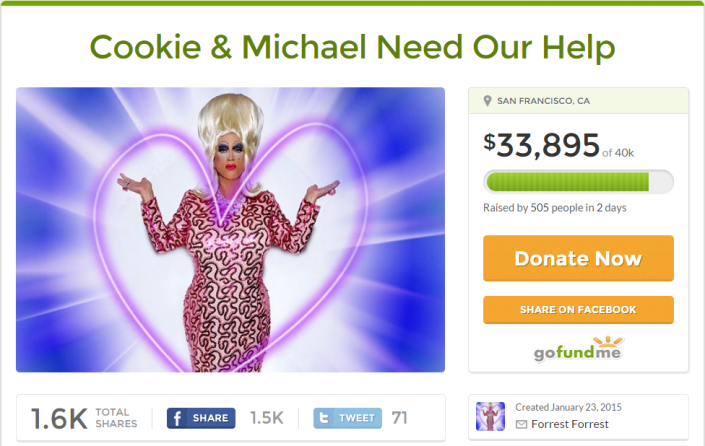