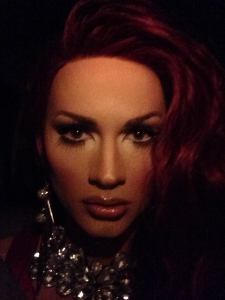 While Joslyn is the most humble and kind person with a lighthearted manner, there is a darker side she shared with us. She admitted to growing up with her best friend, Paul and being “celebrity obsessed and we were going to do anything we could to be famous and to be successful.” They both pursued their own avenues, but Joslyn made it on RuPaul’s Drag Race while Paul was still struggling. Paul felt some sense of failure due to Joslyn’s success. While people tell her not to blame herself, she feels a sense of responsibility and ultimately guilt for her success due to the timing of his suicide.

in Worcester. She said he must have felt alone in that moment, but it was too much for him to handle. He couldn’t be happy for Joslyn because he was too much in his own head about his own sadness. She said, “it’s just a hard thing to swallow because he did it on that night.” Paul bought Star Magazine every week and the week of Paul’s funeral Joslyn was in it. She feels like every time something great happens in her career there seems to be a reminder of him.

line overnight for the chance to get an autograph and picture. She feels like if he hadn’t killed himself he may have been living vicariously through her now that she’s on the other side of it and thinks, “Dude, I did it and where are you? It’s hard to wrap my head around it because I’m still going through that.” She said she cries herself to sleep, she does feel very lonely and gets inside her head.

It’s very emotional for her but she doesn’t want to be crying for her fans’ pictures so sadly, Joslyn bites her tongue during her own meet and greets so she doesn’t cry. She recalled one of her favorite times, “this girl came up to me and she was so nervous and she was shaking and I fixed her hair for the picture. She just had all this makeup on and it just didn’t match her because you could tell she was just so shy but her look was like she was so confident. So she posed

for the picture and she walked off and then she stopped and she turned around and came back to me, it was like she had this thing in her head she wanted to say but she was too nervous to say it, she said ‘um, I just want to say thank you because you give me the confidence every day to be more like who I am and be honest and be my true self’ and she just walked away and I started balling.”

Joslyn says even with all the hate she gets, the people that give her this type of love make it all worth it. She said she gets messages from people who have problems with suicide and she feels like she may have a good platform to help people understand and relate. Joslyn is a true gem and sharing this part of her with us meant a lot. We debated about writing this because it was so emotional and in fact brought tears to our eyes, but we feel it is important for anyone who is dealing with sadness, depression or any thoughts of suicide to know they’re not alone.

Rest in peace Paul and our thoughts and love go out to your friends and family. If you or someone you know is having thoughts of suicide, please reach out to someone, click on this link www.suicidepreventionlifeline.org or speak to someone. Get help, because suicide is not the answer.