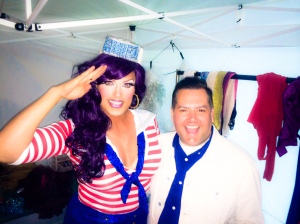 In our final fan segment of our interview with Pollo Del Mar we share with you a side of her you’ve asked about and she wants you to know.  We asked her what her fans might not know but should.  We were surprised to learn that she’s really shy.  Whether it’s “a male or female, or online or in person” if they’re flirtatious with her, “it completely catches me off guard and I kinda go into a shell, it’s very contradictory.” We have found that very true with some of the other queens we’ve met and mentioned as such. She commented, “Doing drag makes me a super hero, Wonder Woman isn’t just an icon, Wonder Woman is how I feel.” She admits to accidentally slipping into “Pollo” personality without makeup with her boyfriend and has to pull it back.

It takes her an hour to an hour and a half to get prepared, this includes her mental preparation to take on the different personality that is Pollo Del Mar.  “When I walk out the door as PDM. PDM does not give a sh!t, she does not care what my neighbors think she does not care what people out there think.  But the person that’s behind the makeup suffers from a lot more insecurities and a lot more humanity.”
She feels drag performers become people they aren’t necessarily able to be 100% of the time through the character they create versus who they are behind the scenes.

Fan Question from Candace Kraus: “What’s it like to be a sober queen in the industry?” Her response was surprising to us, “the entire time I’ve been performing, I’ve never used drugs or alcohol ever. In my personal life I don’t participate in that.  And I celebrated 10 years of sobriety in April.” Congratulations Pollo! She performs for the crowd so the adrenaline and passion for what she does gives her that extra energy.  She’s fortunate that the area of San Francisco she live in does support her sober lifestyle.  Not necessarily as true when she travels, but she’s Wonder Woman, so she can’t be defeated! She added, it allows her the advantage to pay attention to what’s happening and ensuring everyone’s have a great experience at her show.  Which was not the case when her “fun became more important” when involved with “extra-curricular” activities.  She can also pay attention to those who have a little too much and prevents any harm from happening when she can.

Fan Question number 1 from Jessica: “Queens have a variety of followers, why do you think straight females are drawn to you and other queens?” She knew immediately which Jessica was asking and has so many kind things to say about her. “I love Jess,” she said and included “she’s such a lovely person.” But as far as women and their connection to queens, it’s a non-threatening and complimentary relationship.  “There’s always been that lifelong attraction between certain women and their gay best friend,” she adds when you crank it up by adding drag to it, “you don’t have to worry about being that sexualized object”

We followed up with the inquiry into why lesbians like drag queens so much and she said, “she has a more significant lesbian following than most” she’s comparing to her show to others she’s been to.  She reads people in the crowd and feels like she pays attention to the women in the crowd not just playing to the men.

Fan Question number 2 from Jessica: “There are a lot of catty queens, how do you keep yourself so grounded?” Pollo said she is not grounded and is as catty and bitchy as the next person.  But she did say, “Anything I tweet should be something I say to a person’s face.”

Fan Question from JenDoof: “Will you adopt a black bae?” She laughed about the question because it was a play on the fact that Pollo admittedly loves dating black men.  She said, “at some point in my life I think I would love to be a parent.” She said her mom would be so happy, but she needs to have the stability in a partnership and relationship to ensure her child is raised with the best chances.

She talked with us about her name and if it was related to Jessica Simpson.  She admitted she was a fan of Jessica, but her name did not come from Jessica Simpson, even though the timing was within a year of the “Chicken of the Sea” incident.  Her name actually came from an item on a menu and evolved through time.

Her advice to anyone coming up in drag, “If you’re not having fun, nobody else can have fun.” She also added she’s always had a plan and makes sure she

checks herself every six months or so. She talked about her preparation for TrannyShack Star Search and the Miss TrannyShack Pageant. She added one additional piece of advice, “Do not trade off your identity behind the makeup for your identity in the makeup.” She said she went through quite an experience with a close friend of hers when she learned that lesson the hard way.

Her next big project is Silicon Valley Pride, which is happening on Sunday, August 17th, 2014.  She’s been hired on to re-brand and give new birth to the event.  She’s happy Silicon Valley Pride can provide that sense of community for those who don’t have that safety in their own neighborhoods.

We had a great time learning about Pollo Del Mar and we hope you had the same fun.  We’ll put the entire interview on our website for permanence since we’ve enjoyed getting to know her so much.  We thank her for taking the time to speak with us and enjoy what’s to come from her.